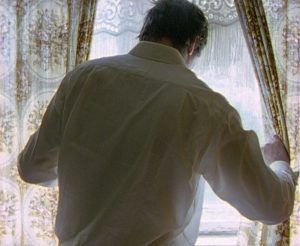 “Gregor Alexis moves about on disused land, in derelict and overgrown
houses, as he does in the labyrinths of his inner worlds.
Jana Debus’ film about her schizophrenic brother is a sensitive
personal portrait combining objectivity and melancholy. This empathetic
exploration of his personality is reflected in the form of
the film, in the interplay between the documentary narrative of her
brother and the visual representation of the jagged landscapes of
his psyche – in settings, pictures and gestures that create a kind of
calm auto-poetry.”
JURY YOUNG TALENT AWARD FOR EXPERIMENTAL FILM:
BJØRN MELHUS; PROF. DR. GUNDOLF S. FREYERMUTH;
CHRISTOPH GIRARDET; FLORIAN GWINNER; SYLVIA SCHEDELBAUER

The filmmaker’s schizophrenic brother recounts personal experiences,
slipping between first and third person. The locations chosen for this
portrait – a desolate apartment and a wasteland littered with abandoned
machinery – are indicative of the condition of someone potentially as vulnerable
as the insects that collect on his windowsill. MARK WEBBER BFI
LONDON INTERNATIONAL FILM FESTIVAL

With Gregor Alexis, the filmmaker has made a balanced portrait of her schizophrenic brother. A gripping and intimate encounter in which the locations, a vacant lot and an empty house, subtly mirror his vulnerability. IFFR, 2010