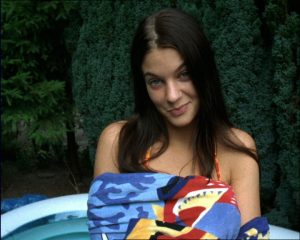 “The exploration of a real self-dramatization touching on aspects of identity formation” is how Jana Debus describes her video concept, in which the 19-year-old Leonie Saint gives the viewer a glimpse into her life as porno star. She reflects before the camera on her self-image as sex-film actress based on her experiences, sensations and memories. The question of whether it degrades her as a woman to “present” herself through her body is to be understood as a working surface on which a discourse takes place “that she herself best knows how to conduct”. In this fragmentary narrative, Leonie´s identity is like a puzzle whose pieces can never be put together to form a whole. We are able only to sneak a peek at diverse moments and impressions of her life, feeling as if we had been caught in our voyeuristic pursuit. Image and language do not match here, but are instead placed next to one another as equally relevant narrative forms, yielding a double perspective. In the clear, unadorned shots, Leonie´s body language dominates, mixed in with detailed views of her private environment. The fact that pornography has long since become a socially acceptable part of our culture was already clear before Jeff Koons and Ilona Staller, alias Cicciolina, created their famous artworks in the 1990s. KRISTINA LAUBE, VIDEONALE 11, 2008